What is the Difference Between Ice Cream and Gelato? 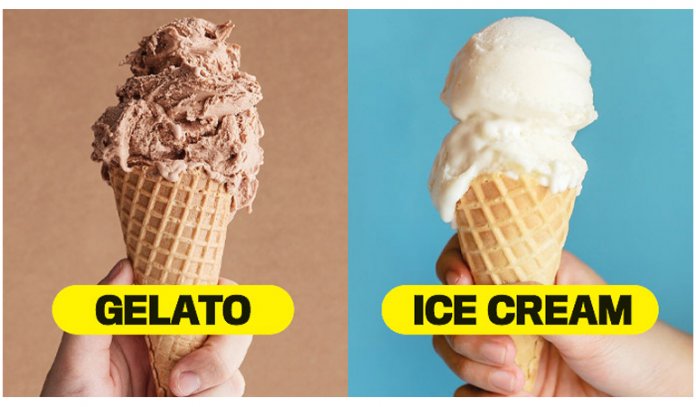 Whether ice cream, gelato, sorbetto or frozen yogurt, I am a fan of the frozen dessert realm. I have travelled to Italy and tasted the sweet, life giving ambrosia of gelato: maybe it is the water, or the romance or my well worn traveller’s palette; but I have not had such a sublime frozen treat as in those delectable licks outside the Vatican City in Rome.

Gelato has a more intense flavour than ice cream. The main reason for this is the churning process involved in making gelato versus making ice cream. Gelato is churned at a much slower rate, thereby mixing less air into the product, leading to a more intense flavour. Ice cream is churned much faster and can contain up to 50% air depending upon the variety you buy. Contrary to what I believed before researching the answer to this question, the higher cream percentage in ice cream, leaves a thin coating of creamy film on the inside of your mouth, obscuring the other flavours, be they nuts, caramel, chocolate or cookie dough.

What about the ingredients?

The variance in flavour between different gelato brands is due to the calibre of ingredients. The variance in flavour of ice cream brands is usually the result of using Modified Milk Ingredients as the primary ingredient as opposed to cream. Gelato is more dense; it has less air than ice cream, intensifying flavour further. Gelato also has more egg yolks, less cream and more milk, making it lower in fat than its ice cream brother. Modified milk ingredients are any components of raw milk that have been chemically modified in some way. Ice Creams made with Modified Milk Ingredients tend to be labelled as “Frozen Dessert” rather than “ice cream” if cream is not their primary ingredient. I have found that actual “ice cream” has a fuller, richer and more authentic flavour to “frozen desserts”.

You can buy gelato, ice cream and frozen dessert at most grocery stores. If you are interested in understanding what you are eating – read the label and list of ingredients.