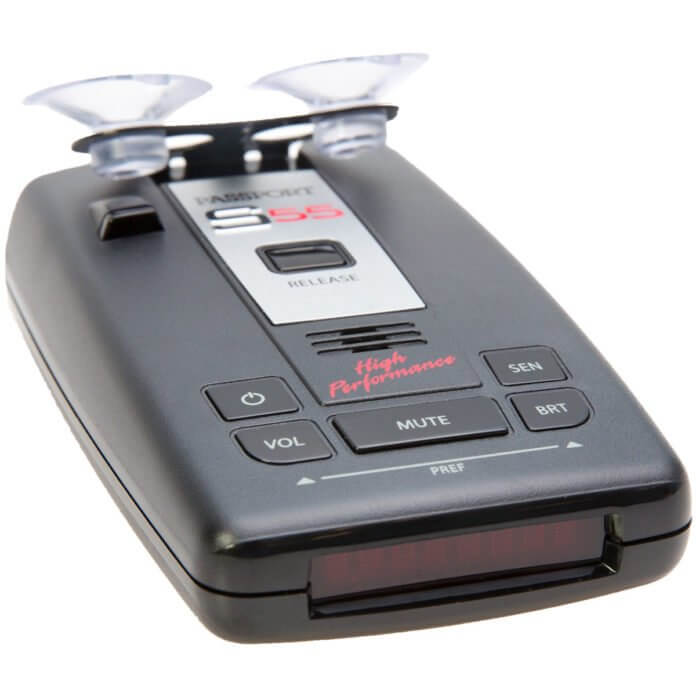 To get your mind a little bit less busy from remembering all the usual hiding spots of the speeding camera and radar gun, a radar detector can be installed in the vehicle to give you the warnings to slow down when there is a possible radar or laser gun to monitor your vehicle speed.

For starters, the Escort Passport S55 is an excellent option to look into. Due to the lackluster of features, It is cheaper than a lot of other newer versions of a radar detector in the market.
However, it is still the most performance device that reliably scans and picks up the long-range signal from the radar gun mile away.

Below is the extensive review 5 Best Radar Detectors. If you have never bought a radar detector before, this device is a good starting place.

As a result, the price of the S55 is appealing for those who only want the backbone features of a typical radar detector.

If you have never purchased a detector before and now you want to invest in a small sum, then continue reading below to comprehend what the Escort Passport S55 can offer.

The Pros Of The Escort Passport S55

Robust Radar Protection Range
The most remarkable feature of this detector device is the long-range radar detection thanks to the powerful Digital Signal Processing.

The Escort Passport S55 can scan and spot all the radar signals within a broad spectrum. The signals include the Super Wide Ka-band, K, X-band, etc.

Moreover, to minimize the false alarms from other intervening sources, the Escort S55 has a built-in AutoSensitivity mode to adjust the sensitivity of the signal automatically.
This also means that the device will only pick out the potential threats selectively and accurately. This is the number one priority that the detector buyers always look for in the first place.

From the outer appearance, the Escort Passport S55 brings in an impression of a reliable and robust device.

The main display interface is backlit with red-color Led light to display the detected radar signal. That makes it very pleasant for the users to see the digital number and signal, especially under the direct sunlight or in the night.

To let you focus on the road, the Escort Passport S55 comes with a built-in sound system to give audio warning sound when there is potential threat nearby.

The sound quality of the S55 is very crisp and clear. Moreover, you are in complete control of the sound volume thanks to the volume buttons on the interface. You can also mute the sound if you only wish to use the visual alert instead.

There is also an auto mute feature that will fade out the sound automatically the further you are away from the source of the threat. This is very convenient if you want to have both a visual and audio alert system.

The Cons Of The Escort Passport S55

The most problematic setback of the S55 is the Blind Spot Monitoring (BSM) system which can be found in the newer versions of the modern car. The BSM system can detect a vehicle within close vicinity to your car and will give you warnings that you should not change into another lane.

The problem is the BSM system uses the K-band frequency, which is the same frequency that the policy radar gun uses.

That means that the Escort Passport S55 cannot distinguish these K-band signals apart. So you will either end up with a lot of false alarms or miss out on the real police radar signal.

Despite the major setback of interfering signal with the BSM system, if you own an older car that does not have this system, the Escort Passport S55 will work perfectly as a robust long-range detector. Moreover, you can invest in this fantastic device without having to worry too much about the value over feature ratio.

Alex Anderson
Our lead experts-analyst, Alex Anderson, has reviewed hundreds of electronics devices, automotive gadgets, and other products in more than 10 years. He a journalist, software trainer, and sometimes Web designer. Alex writes news stories, columns, and reviews for us and other popular sites and publications.
RELATED ARTICLES
Radar Detector

Are Radar Detectors Legal in US? [States That Say No!]