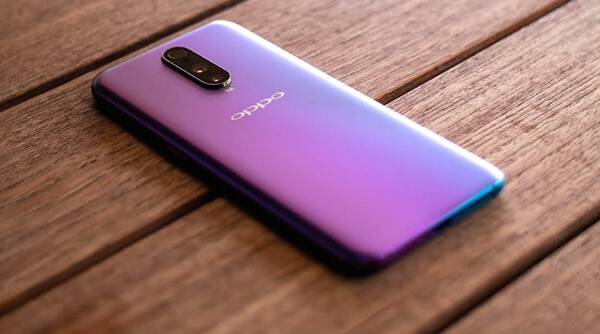 The Oppo RX17 Pro features a good camera and an in-screen fingerprint sensor but OPPO’s decision to not use a flagship processor makes it hard to pay a flagship-level price for it.

Oppo may not be a household name, but the handset maker is big in China and its phones have now become available in the US. The RX17 Pro (also known in some regions as the R17 Pro) is not the company’s flagship handset – that accolade goes to the ~450$. However, the 6.4-inch Oppo RX17 Pro is a direct competitor for a current favourite in the value-for-money stakes – the OnePlus 6T (NB: Oppo, OnePlus and another top Chinese brand, Vivo).

The RX17’s most compelling practical feature is probably its incredibly fast charging. If you’re a power user, this alone may be enough to seal the deal.

Smooth lines and neat design characterise the Oppo RX17 Pro’s look and feel. The screen covers nearly the entirety of the phone’s front, with just the tiniest ‘teardrop’ notch in the middle of the screen at the top to accommodate the front-facing camera. This results in a screen-to-body ratio of 85.4 percent. Rounded edges blend into the backplate, whose raised lozenge houses a three-camera array.

Soft, warm to the touch, and smooth like satin, the glass back of the Oppo RX17 Pro is glorious, especially in the blue and purple color — called radiant mist — seen here. It’s not a gradient in the same way as companies like Huawei and Honor use, but a fade between the two colors that moves from left to right, incorporating an S-shape flash in the transition. It’s not hyper reflective like the Honor View 20, but more like the subdued sheen on the back of the OnePlus 6T. There’s a good reason for this similarity: Oppo is part of the same smartphone empire as OnePlus, along with Vivo and other offshoots.

The prominent camera bump is centrally mounted, and rests on any surface the phone is placed face-up on, risking scratches appearing on the lens cover. Around the front is a 6.4-inch AMOLED screen with a teardrop notch, and minimal bezels. The phone weighs only 183 grams, which is light for a large, modern device. It disappears in a pocket nicely, and the slim dimensions — 7.9mm thick and 75mm wide — make it pleasingly compact. Oppo definitely gets the design and in-hand feel right with the RX17 Pro. Like the OnePlus 6T, it will fool plenty of people into thinking it’s a much more expensive smartphone than its real price. 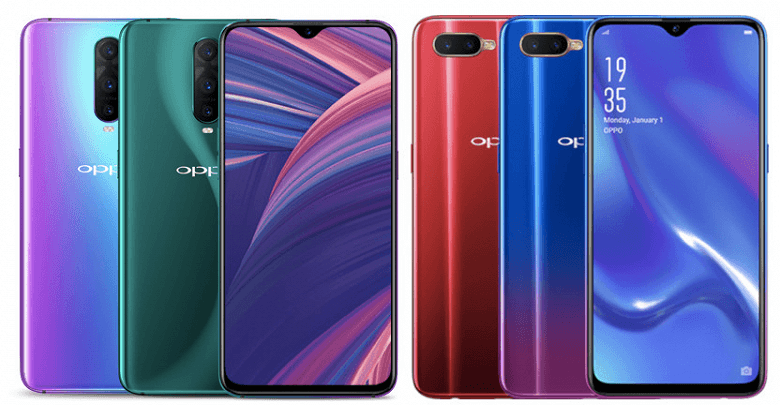 Evidence that it’s not $1,000 comes when you compare it to today’s bezel-less phones. The Oppo RX17 Pro looks like a 2018 phone, rather than newer, ultra-modern devices with pop-up cameras and hole-punch displays. The sleep/wake and volume keys are also quite small and hard to locate, especially when the phone is inside the transparent silicone case that’s included in the box, and they feel cheap when pressed. You won’t find a headphone jack on the body either, and there’s only one speaker on the bottom of the phone.

Oppo saw Samsung’s variable aperture camera on the S9 Plus and S10, and wanted the same thing. The primary lens on the RX17 Pro has 12-megapixels and a variable aperture between f/1.5 and f/2.4, with optical image stabilization for good measure. It’s joined by a 20-megapixel, f/2.6 aperture lens, and a time-of-flight sensor too.

On paper, these are impressive specs, putting it up against the Honor View 20, and the aforementioned Galaxy S9 Plus/S10. In reality, it doesn’t quite make the most of it. The camera often washes out bright surroundings, even with HDR, instead of making blue skies beautiful. There’s a special setting called Dazzle, which adds a radioactive glow to some bright colors, and is best left off if you want realism. Even without it, the camera struggles with color balance. In a photo of some white flowers, the RX17 Pro emphasized a tiny amount of pink on the petals to the point where the flowers became mostly pink. 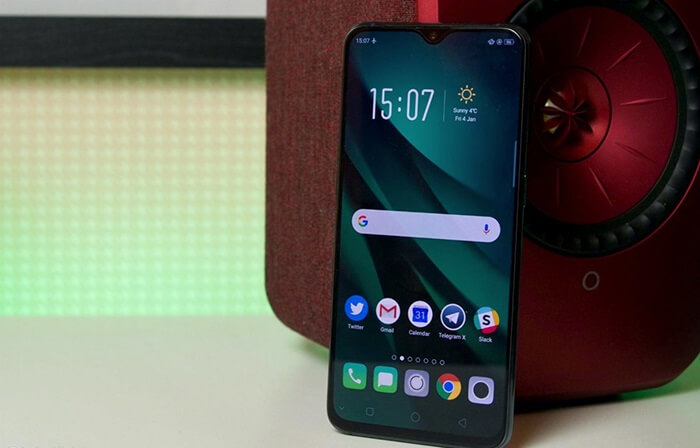 At night, the RX17 Pro’s camera impresses, and I took some stunning photos in Taipei, where the bright street lights and colorful neon allowed the camera to really shine. There is a good 2x zoom mode, as well as a portrait mode that’s effective enough. The onboard image recognition software did indeed recognize objects, but didn’t seem to alter the image when it did.

The selfie camera has 25-megapixels, an artificially intelligent beauty mode, a portrait mode, and some fancy pixel binning technology too. It’s good, with realistic color balance and pleasant, natural skin tones. The portrait mode has trouble with extreme edges like glasses, but does blur the background pleasantly. The app itself has an edit mode, but it’s lacking in comparison to Snapseed, or Huawei’s own photo editing suite, for example.

Oppo gets close to putting a great camera on the back of the RX17 Pro. Low-light shots are fun, and there is plenty of opportunity for experimentation there, but in other situations its inconsistency means it’s outclassed by many other cameras.

The Oppo RX17 Pro is not lacking in power, despite not having a headline-grabbing processor inside. It proves that today, mid-range smartphones aren’t the compromise they once were. The Qualcomm Snapdragon 710 zips along, and although some of the animations feel a little drawn out (possibly to cover up some speed issues), it has been a strong everyday performer. The chip is accompanied with 6GB of RAM.

Here are the benchmark tests.

These scores won’t trouble the top phones out there, and are lower than the new Google Pixel 3a models, the Moto Z3, and of course, all flagship phones with the Snapdragon 845 or 855 chip. However, benchmarks don’t tell the whole story. The RX17 Pro is a feisty performer, and it was never too slow for normal use.

You’ll get a day’s worth of juice from the RX17 Pro’s 3,700mAh battery. I ended most days with around 20% remaining, so it was not strong enough to last into a second day, and that’s with relatively heavy use. After playing a Full HD YouTube video over Wi-Fi at full brightness, the battery lasted for a respectable 12 hours and 20 minutes. That beats out most phones, except for the Galaxy S10 Plus, Moto G7 Power, and the Huawei P30 Pro — but again, some of those phones can easily last more than a day, so the benchmarks don’t tell the full story.

Charging is the redeeming feature, as it’s Oppo’s Super VOOC system — which zips to 40% charge in only 10 minutes. This is entirely accurate based on our tests.

Both fingerprint and face unlock security systems are onboard, and the fingerprint sensor sits under the screen. It’s better than many, and certainly improved over time as it learned not only my print, but also the way I hold the phone. It started off poorly though, and required patience to continue using it, but it paid off. The face unlock is also accurate and fast. 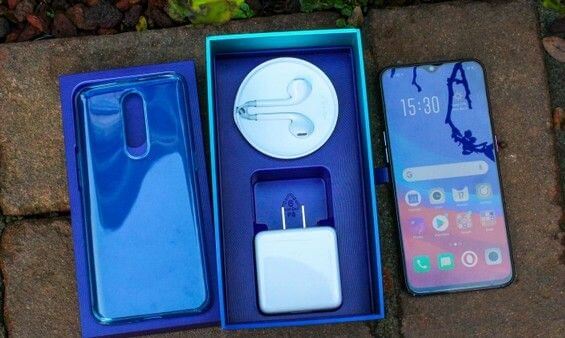 Is there a better alternative?

Yes, we recommend several alternatives which cost around the same as the RX17 Pro, plus one that’s a little cheaper. The price puts the RX17 Pro against the excellent 500 British pound Xiaomi Mi 9, and the OnePlus 6T, which starts at $550 in the U.S. The OnePlus 6T has a stronger processor, similarly fast charging, and a decent camera, while the software is considerably superior. It’s the better buy. The Mi 9 is also excellent, with more power, decent software, and a good camera too. In the U.S., the $400/400 British pound Google Pixel 3a should be considered if the camera is your top priority.

Honor’s View 20 costs 500 British pounds and has a great looking screen with a hole-punch camera, a 48-megapixel rear camera, plenty of performance, and a big battery. It also has a striking design, provided you pick the blue or red model. Additionally, the $450 Motorola Moto Z3 Play is a decent alternative for U.S. buyers. The Nokia 7.1 is made from metal and glass, has a great screen, similar performance to the RX17 Pro, and Android One software. It costs around $350.

How long will it last?

There’s no water resistance or special rugged body here, although a transparent silicone case is inside the box. The phone is mid-range, but shouldn’t be considered slow or underperforming, meaning two-years of use before it does start to feel outdated is entirely reasonable. However, if you’re a demanding owner and want to play the latest games, and use the phone for many hours everyday, it may not suit your needs after a year or so.

We’re also concerned over Oppo’s decision to drop the R series phones, which may impact future software updates. The software is what needs most work on the phone, and any risk of improvements not arriving makes us think seriously about whether it has the longevity we expect from a modern smartphone.

Delectable design and fast charging can’t save the Oppo RX17 Pro from its poor software and spotty camera performance. For the price, there are better phones available.